is a movable interactif dispositif, actually installed in the Musée de la Manufacture. It presents as an hologram the city of Roubaix through its industrial history.

This holographic display is a good way for the visitors of Roubaix to well understand the past of the city, its successes and its crises. It invites to explore the city and to discover the contemporary repercussions and how thoses industrial sites have been reappropriated.

Valorize the renewal of Roubaix

Ca Tisse Factory is shaped as a table on which lie a city of Roubaix map. Metallic inserts represents the notable industrial sites of the city and are tactile. A contact with the finger turn on audiovisual contents as holograms, presenting the architecture of the site, its use back to industrial period and its contemporary utility. a led illuminate a legend in a dedicated insert and some samples of materials are free to touch in little traps. It permits to the visitor to see the transformation of wool in fabric as it goes through the city.

A headphone or speaker permit to hear the explanation about the appropriated industrial site. A speech about each site is consacrated to the role of the building back to the industrial period, to its importance in the economy of Roubaix and its actual activity, its reconversion and the role it has nowadays in the city life. The recordings are available in three different languages, French, English and dutsch thanks to the involvement of the tourism office guides and the museum mediators.

The project take part of the digital actuality because it uses the hologram technology and the Raspberry system in order to present its content to the users. Its innovative aspect resides in the territorial approach. It permits indeed to connect differents places of a territory and create bridges betweend these places and their users.. Beyond the historical, pedagogic and innovating content, the display permits to the visitor to visualize its touristic course for example. The aim of this display is to be used as a tool by structures such museums, tourism offices or territorial promotion agencies (Label Ville d’Art et d’Histoire). So it permits to create a community around the wealth of a territory.

The display was quite easy to use and the members of the staff was there for accompanying the manipulation. However we decided to make the display more autonomous. The user can view the content as he wants without any particular logic or notice. In order to evaluate our experimentations, we implement a system of feedback. Thanks to it, users can show us what they consider as weekness about the display, and the needs they feel with it.

The key partner of this project is the association MuseoMix Nord which unite arount this project confirmated actors of museography and cultural mediation. The association has a role of central facilitator, from the organization of the event which has permitted the project birth, to its involvement in the development and the first prototypes realisation. The association furnish for the rest of the project competences in communication, museography and its contacts in order to integrate in the project artists and researchers and discover the places of exhibition. 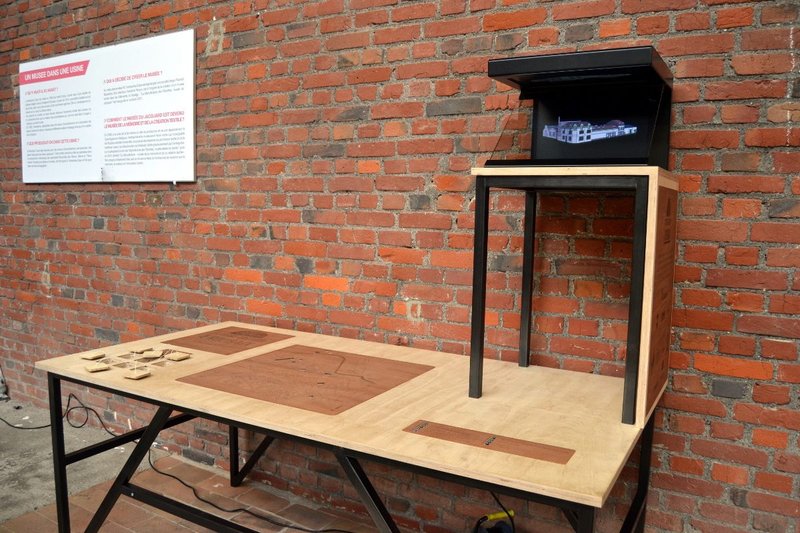 Thanks to the support of Pictanovo, the city of Roubaix, the metropolis of Lille and the Région Nord, that project could existed. The display is actually discoverable in the Manufacture, an old textile factory of Roubaix which presents the industrial epopee. Ca Tisse Factory is the first display of that kind and is still in an experimental phase. The mediators are listening every kind of feedback to improve their futures projects.

Some sites interesting in Roubaix

9 places have been kept with the tourism office because of their value, with a logic of how the wool is created in industrial sites.

These sites have been chosen with the tourism office of Roubaix for their importance in understanding of industrial activity of Roubaix. They are not all touristic sites. Some of them, for example the Teinturerie de la Justice are even still in activity.

For all these sites,the hologram presents the iconic machine. From the spinning to the wool weaving, passing by means of transport of freight of XIXth century and the weighing of raw materials. The display pays tribute to the engineers and textil workers of Roubaix, trained by the city during decades, that ensured its prosperity.